You can rename the default 4 and add more or reduce depending on your sales process. 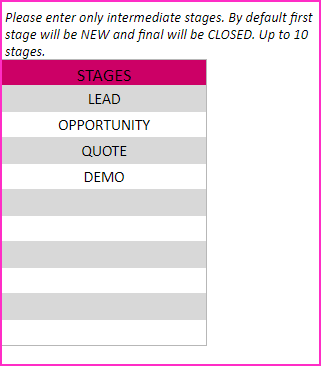 We can enter new deals by typing in the Deals table.

Each row is a separate deal. There are some key types of information we enter in the table. Let’s look at them on by one.

As the template can handle 10 intermediate stages, there are 10 stage date columns.

You can select the column. Right click and then choose HIDE.

When a deal passes each stage, enter the date when it reached that stage. In the screenshot above, first deal became as lead on 20th Oct, became an Opportunity on 22nd Oct and Quote was issued on 24th Oct.

If a deal has not reached a specific stage yet, leave the cell blank.

Then, we enter a Win % for each deal. For deals that are not closed yet, we would enter our estimate of the chances of winning a deal. If we have a 50-50 chance of winning or losing a deal, we would enter 50. The template will automatically convert to 50%. 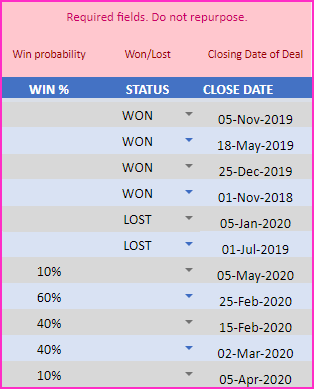 When a deal has closed, choose the status as WON or LOST and enter a Close date.

If the deal is still open, leave the status blank.

Enter a win % for all open deals to calculate the sales pipeline value.

When a deal is closed, always enter close date. When a deal is open, you can enter a close date in future, if you are expecting the deal to close on that date. This information will be used to project future closing deals in dashboards.

There are 5 deal attributes provided.

They can be renamed and Repurposed. 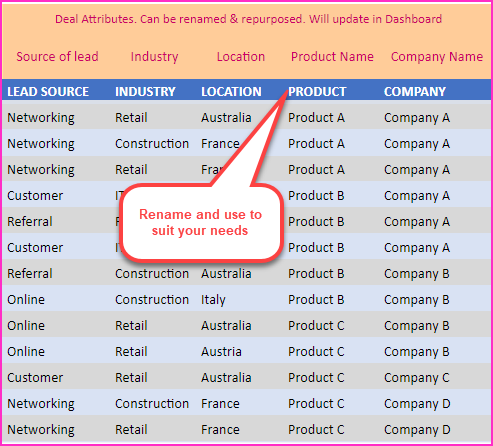 These attributes are useful in the analysis of your sales pipeline to understand what types of deals are being successful versus not. 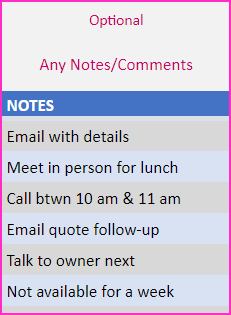 You can type in any notes or comments in this column.

This column can be used to store the reason why the deal was lost. Enter only for deals lost. 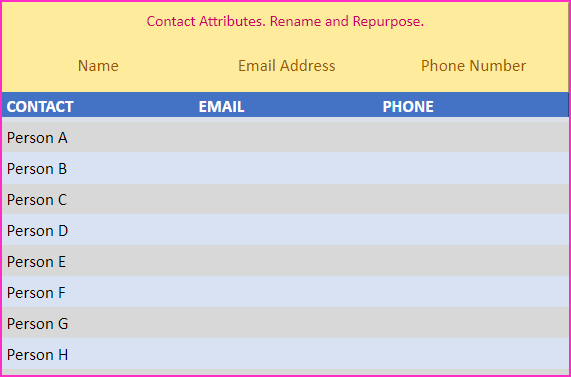 3 columns are provided as placeholders to store Contact name, Email address, Phone number. You can rename and repurpose the fields according to your needs. You can also add more columns to the right.

There are validations in place in the template for data entry. There will be an error message at the top of Deals sheet indicating the errors. Also, the cell with error will be filled with red color for your convenience. 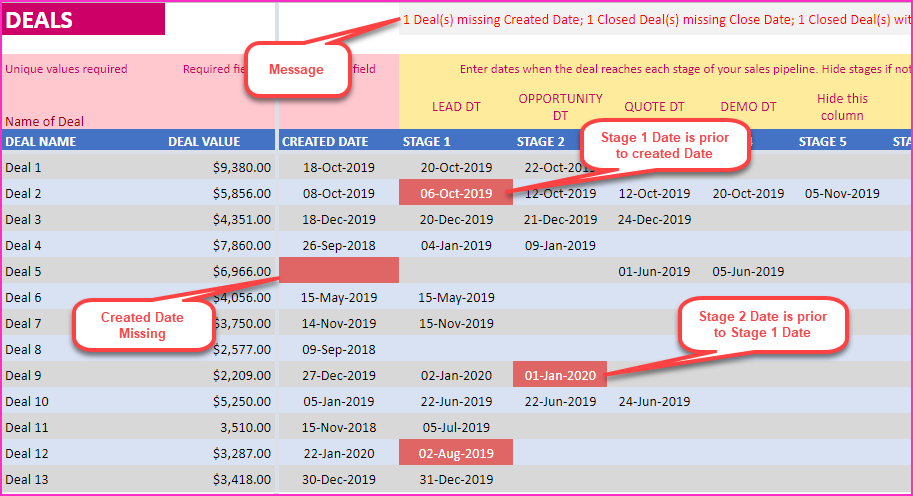 The following are considered errors.

The error applications will not be included in the Dashboard sheet.

As we continue to work on deals, new information may arrive. Based on that, we need to update the deals.

Update Win % for deals as needed, so that your active pipeline is always reflecting the reality.

Deals can be closed if a decision has been taken by the customer to purchase. This is the scenario of a deal WON.

If prospect decides to not to purchase or if it has been a while since the prospect has been in touch, we can close the deal as LOST.

We can enter this information by entering the STATUS to be ‘WON’ or ‘LOST’. The values must be exactly WON or LOST. Other values are not allowed.

Then, we should enter the CLOSE DATE. This date is used to calculate the Average time taken to close a deal.

If the Status is Won or Lost but Close Date is left blank, you will see a red Background color  indicating that the entry is missing. 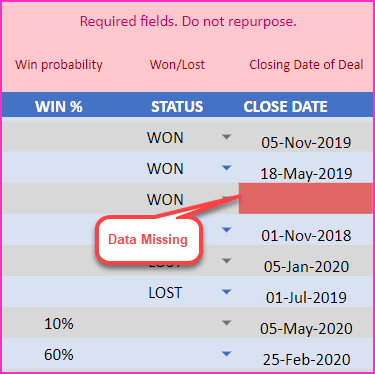 This red Background Color will also appear if Close Date is less than Create Date. This is to ensure that the data is accurately entered.

Win % could be deleted for closed deals as we already know the result of the deal. They will be ignored for calculations.

This step is one that should be done regularly. It is important to keep an eye on the pipeline metrics to improve performance.

The DASHBOARD sheet provides information on performance of all your closed deals. 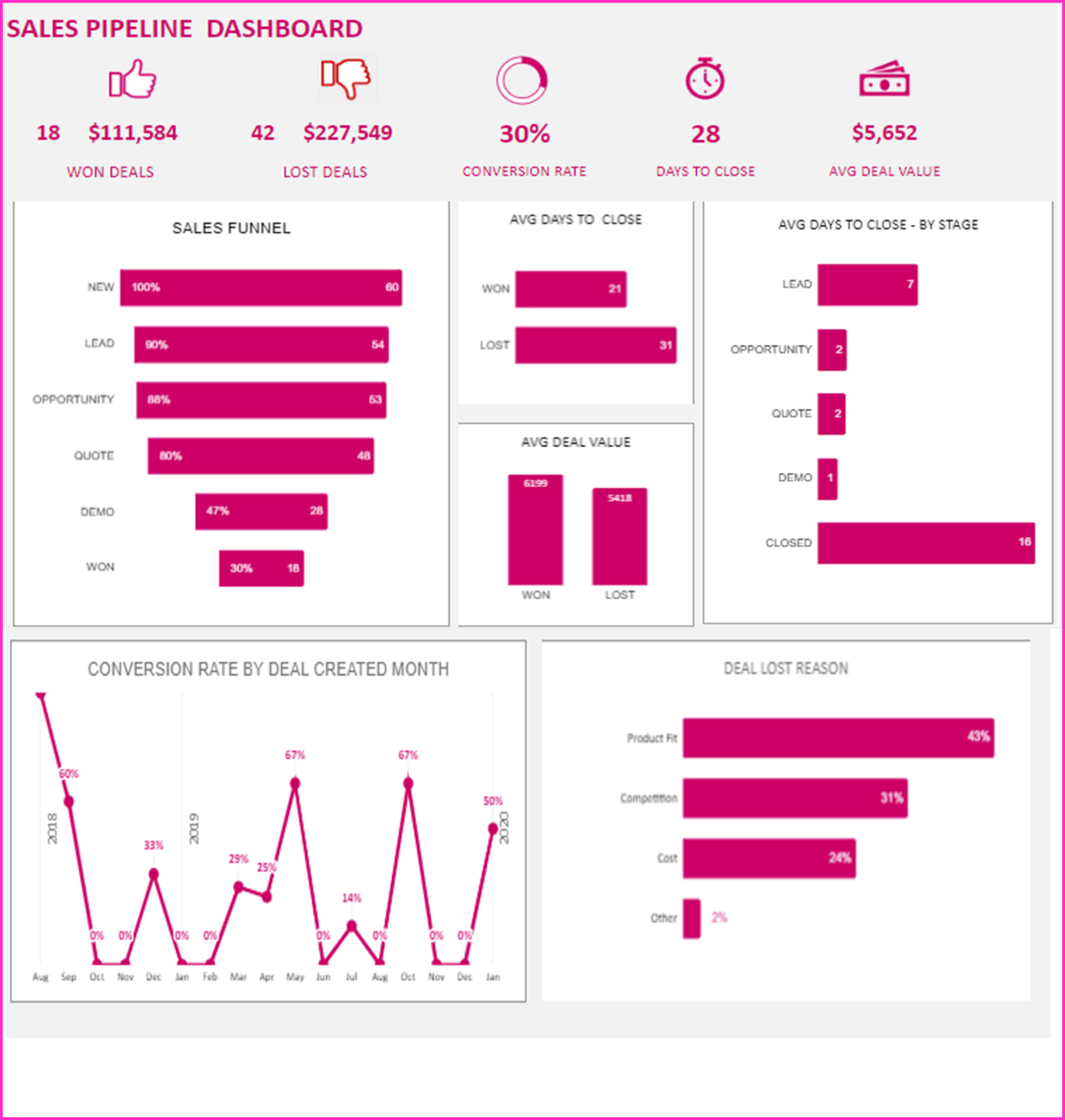 The top section of the sheet shows several important metrics needed. Let’s discuss one by one.

Conversion Rate: 30% of deals were Won.

Average Time to Close Deals: The 60 deals closed took on average 28 days to close. This is based on the Close Date and Created Date we entered for each deal.

Sales Funnel: Where do deals drop off? 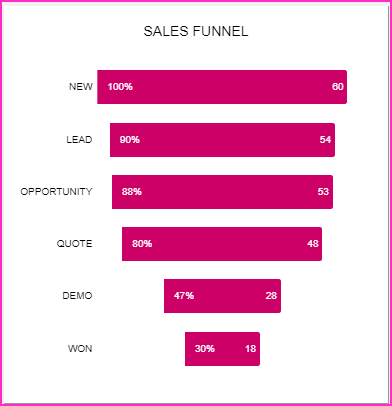 By knowing where the deals are being lost, we can work on those stages to improve our performance.

The Funnel becomes very telling in revealing our strengths and weaknesses. If Demo is the stage we fail most often, we may need to improve the demo event to convince our prospects about the usefulness of our products.

Why are deals lost?

Lost Reason chart shows the top reasons the deals are lost. This is invaluable information to improve conversion rates. 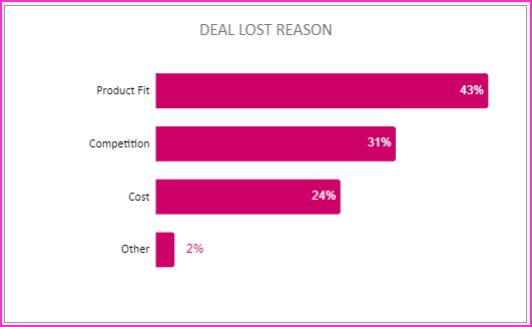 The Dashboard also allows analysis of performance by attribute. 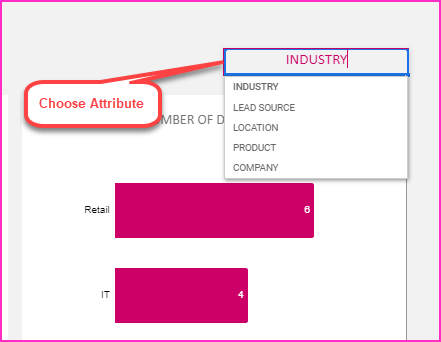 This allows you to see what type of deals are being successful and thus enable you to take decisions on future deals selection process.

These attributes can be cutomized by you as explained in the previous step.

Use the Active Deals sheet to view information on active (or open) deals. 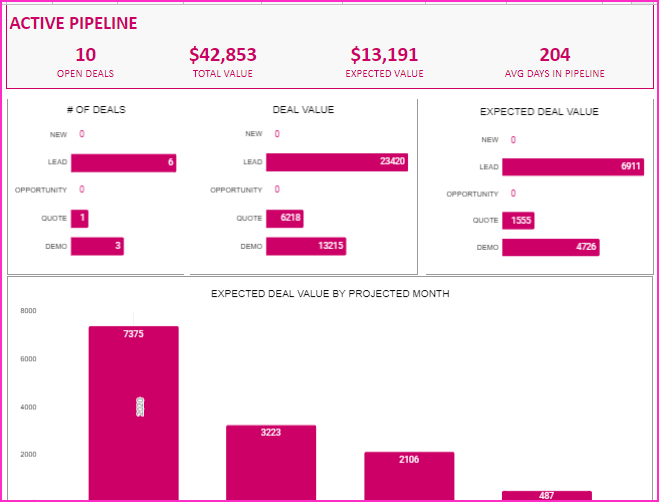 Open Deals: This represents the number of deals that are not closed yet. Any deal whose status is empty (neither WON nor LOST) will be considered as an open deal. Once a status is entered, it becomes a Closed Deal.

Total Value: This is the total value of all open deals. The Deal Value we enter in the Deals table will be used as such. If we win all the open deals, this is the amount we will successfully sell.

Expected Value: The reality is that we will win some deals and lose some deals. So, it is better to be realistic about our estimated sales. Expected value is the weighted sum of deal value by Win %.

Avg Days in Pipeline: This represents the number of days from Deal creation Date to current day, that the deal is open for.

The template also has an optional sheet which you can use to track interactions/activities with clients.

How you can use this on daily basis.

The DUE TODAY counter counts the activities with Activity Date = Today.

You can filter the table on ACTIVITY DATE to today’s date to only see activities that are due today or any specific date.

When you perform one of those activities, enter in NOTES field.

Did you find it helpful? Yes No

Send feedback
Sorry we couldn't be helpful. Help us improve this article with your feedback.